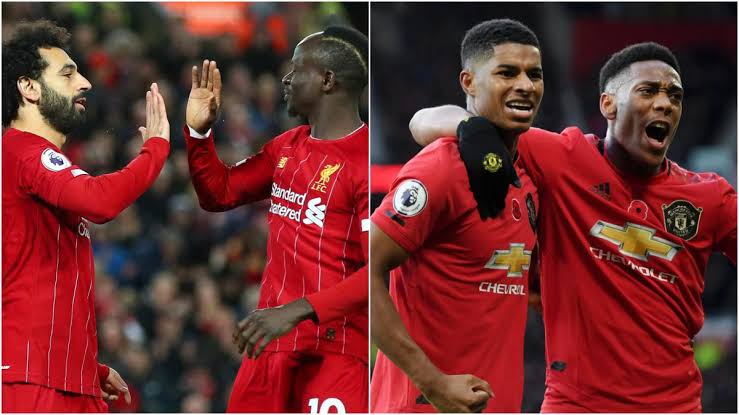 UEFA Champions league winners, Liverpool will play host to Manchester United in the English Premiere League on Sunday, as Liverpool is in the battle to lift its first league title for over a facade.

The teams had met in the first leg where United hosted Jurgen Klopp’s Liverpool at Old Trafford in October in a trilling encounter which ended in a 1:1 draw, a result which has denied Liverpool parallel win so far in the 2019-2020 season.

Liverpool are top of the league with 61 points having played 21 games which ended up with 20 wins and a draw, while United are fifth place on the with 47 points, as they have player 22 games, having won 9, they lost 6 and drew 7.

Ole Gunner Solskjaer’s United conceded a total of 59 goals in their meetings, while Liverpool have conceded the most with 62 goals, the teams have an average of 2.37 goals per game.

Jurgen Klopp’s Liverpool has won its last five league games with its last week 1:0 win over Tottenham and has not lost a game this season, while Solskjaer’s side won 4:0 over Norwich, but has so far lost 6 games.

However in the last two games against Arsenal, United lost 2 bill at the Emirates Stadium.

Marcus Rashford is an attraction in the United side having scored 14 times in the league while Africa’s best, Sadio Mane and runner up Mohammad Salah have both netted 11 and 10 goals for Liverpool respectively.

Liverpool’s Trent Alexander-Arnold has 8 goal assist, with team mate Daniel James having 6, while Mane has 6 for his teams.

World Balloon d’ Or runner up has completed 1,733 passes for Liverpool in the league, while United captain Harry Maguire has completed 1,414 passes, as Alexander-Arnold follows closely with 1,406 passes.

Solskjaer has ruled out the possibility of Paul Pogba to feature in the Sunday clash, as he is yet to be fully fit after injury and Rashford presence is also in doubt after sustaining injury in the FA Cup, while Liverpool will have received a boost with the return of Joel Matip and Fabinho.