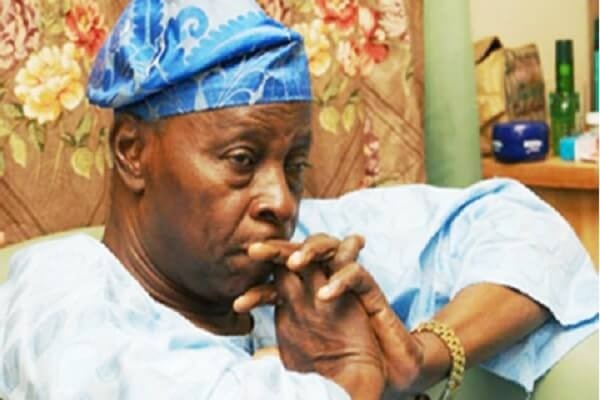 former Secretary to the Government of the Federation (SGF), Chief Olu Falae[/caption]

Few hours after gunmen kidnapped a former Secretary to the Government of the Federation SGF, Chief Olu Falae, the abductors placed a demand of N100m as ransom for his freedom.

The 77-year-old politician who is also a chieftain and leader of the ‎Yoruba Socio-cultural group, Afenifere, was abducted on his birthday, at about 1pm, after gunmen numbering over 20 invaded his farm in Ilado village, Akure north area of Ondo state and kidnapped him.

It was gathered that at about 3.20pm, the abductors ordered the family to pay the N100m ransom before the close of work on Tuesday.

Ondo police spokesman Wole Ogodo said that over 50 policemen have been deployed to the village and its environ to search for him just as the state governor Dr Olusegun Mimiko has summoned an emergency state Security Council meeting on the matter.

He said: “For now, I cannot conclusively say whether it is kidnapping or not. But what we learnt from his Chief Security Officer (CSO) is that the Fulani herdsmen came to attack them on the farm.

“But before now, they have been having a running battle over the grazing on his farm. There was a time he reported them and two of them were arrested and brought to the Police Command where they made an undertaking.

“So they came today and launched an attack. Two of the workers were injured. Others fled into the bush and we were told that “baba” was whisked away.

“Immediately we were alerted, 50 policemen were deployed,” he said.
The Asamo of Akure, High Chief Rotimi Olusanya, said: “We are surprised. I don’t really know what the old man has done?

“He does not have money. He is an old man. We are shocked. The Deji of Akure, Oba Aladesulu Aladetoyinbo, has made efforts to contact the state government. We appeal to the security agencies to do something about it urgently.

“I am hearing that Chief Falae has issues with the Fulani herdsmen for the first time. Anyway, we’ve not received details of the kidnapping. But if that is the case, it is just unfortunate.”

Similarly, the former Minister of Aviation, Chief Femi Fani-Kayode said yesterday that Falae’s abduction was not only unacceptable but is also an exceptionally dangerous development.

In a statement, he said: “I say this because he is not only an elder-statesman of our country but he is also one of the most revered leaders of Afenifere and the South-west.

“We cannot sit by idly and watch our leaders and elders being endangered, shamed and humiliated in this way. It is the government’s job to keep us all safe and secure and they are failing in that duty.

“I call on the president and our security agencies to effect the expeditious and immediate release of Chief Olu Falae. They must rescue him from these vagabonds and vandals as soon as possible before things get out of hand.

“Let it be clearly understood that if anything happens to him and if he doesn’t come home hale and hearty, we will hold the federal government responsible and there will be consequences. Those that are in power would do well to take what I have said very seriously.”

Born on September 21, 1938, Falae was secretary to the military government of Ibrahim Babangida from January 1986 to December 1990 and was briefly the Finance Minister in 1990.

He ran for Nigeria’s president in 1999 on the joint platform of the Alliance for Democracy (AD) and the All People’s Party (APP) against Olusegun Obasanjo of the Peoples Democratic Party (PDP).

PDP Accusations Nothing But An Irritant – APC

Do You Have A Soul? Ex-Wife Tackles Fani-Kayode Over ‘Denied Access’ To Four Kids