OPINION: APC Convention, The Night After… 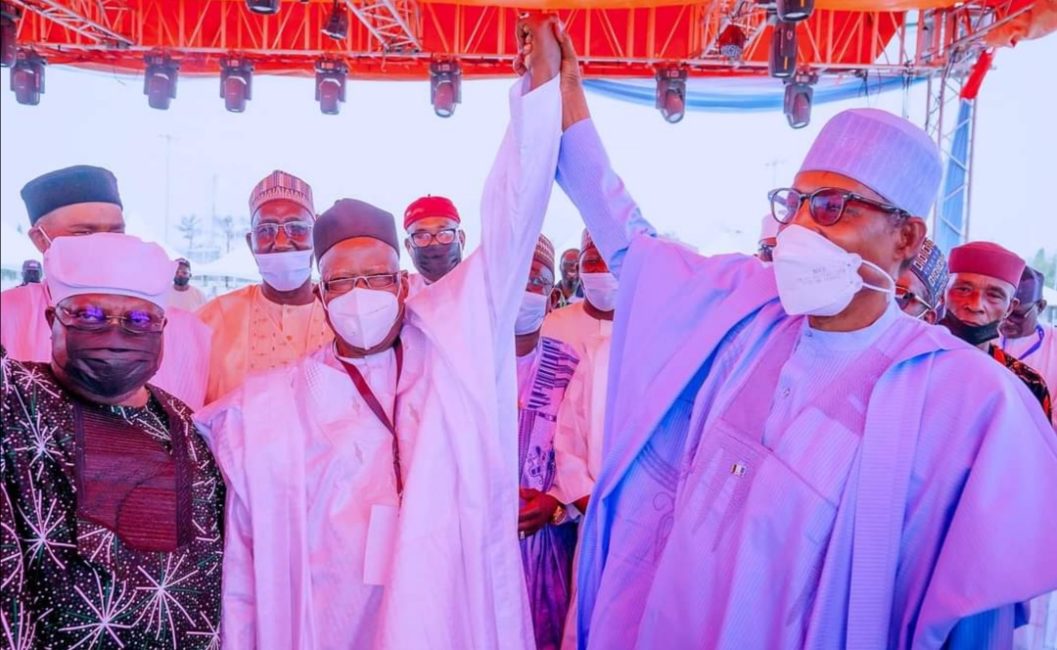 It has been a long road to the APC convention, after 22 months of uncertainty and another long night at the historic and symbolic eagle square that ended the waiting game. At the end, the president and the conclave of governors triumphed. The fundamental tenets of democracy – freedom to choose candidates, individual conscience and conviction dictating the choice of candidate, and competition among candidates to demonstrate capacity and abilities for which they will get votes for in the quest for positions in the party administration – were all sacrificed for the stability of the party, marked by political horse-trading, high wired intrigues, reign of the oligarchs and permutations. This situation is similar to what transpired at the PDP convention last year.

Unity List surfaced, endorsed by all the governors elected on the party’s platform. The emergence of a unity list, a product of behind the scene power-sharing arrangement, led all contestants to the party’s chairperson to step down from the contest and support Senator Abdullahi Adamu, the preferred candidate of Mr President for the post. Unity list is another word for democratic consensus and appears to be one of the Nigerian political class’s innovations offering to democracy.

Although accepted as part of democratic practice, Unity List or democratic consensus may become undemocratic depending on its application. When people at the upper echelons of power orchestrate democratic consensus and force it on party members to deprive them of the opportunity to exercise their democratic freedom to choose the candidate of their choice based on their knowledge and conscience, democratic consensus becomes tyrannical and authoritarian. Its triumph, although expedient, may upend democracy and lead to political apathy.

The big questions in dealing with Unity List or democratic consensus are: who determines the unity list and what criteria determine who is in the list? What is consensus about a Unity List, and who determines this consensus? How do we arrive at this consensus, and for whom? I must point out that when democratic consensus is reached based on broad base consultation of most party members and for reasons apparent to all that is germane for the development of the party and democracy, it might be a tool for growth and stability.

However, when there is no broad consultation and the decision as to Unity List and the people in it do not have vast acceptance by members of the party but was decided by a few for selfish and parochial interests, it becomes a tool for oppression and dominance by power wielders – in this case, the tyranny of the governors and the president. Three key factors promote this tyranny of the governors; the first is unlimited access to state resources. The second is the lack of checks and balances by the various state houses of assembly, and the third is enlightened self-interest to protect themselves.

I acknowledge the imperfections of our democratic system and our federalism, and I also understand the importance of the principle of fairness, equity, and justice in power distribution in our multi-ethnic and heterogeneous country. With utmost good intentions, we may resort to tinkering with the established western-style democratic ethos to achieve a greater good.

However, we must exercise caution because the “road that leads to hell is paved with good intentions”. Sometimes, we can quickly lose the essence and purpose in tinkering with the tenets of established democratic practice.

The fundamental principle of democracy is that power belongs to the people and that periodically, in a free and transparent election, they choose whom to transfer their powers to as leaders. Any process that takes away this power from the people, either in party or general elections, is an anathema to democratic progress.

Although there may be a need to adapt our democracy to fit our local circumstances and needs, we must be careful that the democratic process is transparent and engages most people. It must be defined from ab initio in the political system and, most importantly, cannot lend itself to abuse by politicians and people who allow the fluidity of process to constantly achieve personal gains against collective gains.

Two schools of thought compete for space on the issue of democratic consensus – those for it and those against it. Those against consensus argue that the democratic process is full of conflict and competition to decide whose ideas or views of how and who govern society triumph. Furthermore, they argue that the right thing is to allow all persons and ideas to compete freely. If there is a need for reconciliation, it should be after the people have made their choices. They also posit that it closes or restricts the democratic space for those who are not insiders.

Those who support consensus believe it is the best way to preserve party unity in a fragile democratic system where democratic culture has not yet taken root. In the specific case of APC, the president needed to intervene for party cohesion and to forestall implosion. Those who are conversant with recent happenings in the party believe it was on the path of self-destruction.

Each school of thought on democratic consensus has its pros and cons. However, mature democracies hardly rely on democratic consensus, and they have developed mechanisms to deal with democratic conflicts that emanate from a diversity of opinion, interests, and aspirations of members of the party or people in general. However, the current state of APC favours consensus. APC is in bad shape; the contention for the presidential ticket is taking a toll on the party’s health. This convention is too close to primaries preceding a general election.

So, we hope that as democracy deepens in Nigeria (although some may argue that democratic consensus hinders progress to maturity), democratic consensus – be it in the form of unity lists, political zoning, or federal character principles, will reduce drastically, if not completely eradicated. They will only exist if we have adopted them now as part of our bespoke democracy that caters to our unique political circumstances and needs.

One factor that drove the APC party’s decision to adopt a Unity List is the fear of the judiciary and the impact of the panoply of litigations and counter litigations that ensues as the aftermath of any conflict in the party. The judiciary is beginning to play a significant role in the parties’ internal affairs. Is this good or bad for democracy?

Suffice it to say that the judiciary is the last hope of the ordinary person to seek redress and compensation when wronged. However, the judiciary is being weaponised to drag the party down or undermine the party’s unity. The fear is that if there is no unity list and there is an open competition and elections of the candidates for various posts in the party, losers may recourse to the judicial process to seek redress. Moreover, by so doing, this may cause distraction and tension just a few months to an all-important general election the ruling party are planning to win. The work needed now to achieve landslide victory for the party is enormous, and distractions from fights or conflicts from party elections will undermine this.

Besides, all APC key actors agree that the stability of the ruling party is critical for the advancement of democracy in Nigeria, but their actions do not portray they know that. What is driving all key actors is positioning themselves to realise their political ambitions. This case is even more evident in the intractable “factionalisation” existing in most state party structures. These factions spill over to the national convention and cause disharmony and lack of cohesion. Little wonder proponents of democratic consensus felt that that is the only way forward to avoid mayhem.

The convention was a success in some ways and had areas for improvement. The most important success is that it has voted in the “de jury” party chairperson and a national working committee to pilot the party’s affairs before and during the general election in 2023. About 46 NWC positions are contested and filled, including 21 NWC and 45 non NWC positions. Given the drama of party disunity prior to this convention, the party is better positioned to focus on the forthcoming election.

However, I noticed that this convention was “game as usual”. The convention’s rhetoric and narrative toed the same line as the past and even mirrored the PDP convention. As was the case with PDP, much focus was placed on platitudes and niceties about the party’s progress, government, and areas they have done well throughout the APC convention. Speeches after speeches poured encomiums on President Buhari, and everyone seemed to be “patting everyone on the back” for a job well done so far. It is essential to state that the speeches of Gov. Abubakar Bagudu of Kebbi, Rt Hon Femi Gbajabiamilaand Vice President Yemi Osibanjo were outstanding and profound.

However, conventions should be times for reflections and critical analysis of what the party and the government it created have done to improve people’s lives and democracy. I must note that there was no discussion about the situation in the country, no discussion about the ideological underpinnings and policy direction of the party or how to deliver dividends of democracy to Nigerians. Nobody talked about rising poverty in the land, perennial ASUU strike, inflation, insecurity, unemployment, and the many issues plaguing Nigerians, and the party stands on how to solve the problems.

APC must ideologically and philosophically differentiate itself from other parties and be very clear about what it stands for, what it believes and what it is “selling to the people” – value proposition. This convention is a missed opportunity to deepen the core values of APC and instruct members of the unity of the “broom”.

In the final analysis, the intractable APC convention for 2022 has come and gone. We have elected (selected) our party leaders primarily through democratic consensus. We do not yet know the effect on our democracy, and we cannot predict the impact accurately. Democratic consensus may either be an ingenious system that saved the APC convention from imploding or a knee jerk reaction that closed the political space and killed the democratic principle of the power of the party members to choose their leaders in a competitive party election without interference from any quarters. Only the future will tell, and political analysts and pundits will look back at this convention and pontificate on its impact on democracy in APC and Nigeria in general. Henceforth, Nigerians look forward to a peaceful APC that will focus more on the incoming general elections than political dramas within the ruling party.

Abia 2023: Gov Ikpeazu Hits Back At Abaribe After Attacking Him Over PDP Zoning Arrangement