Doctors Withdraw Services In Abia After Kidnap Of Colleague 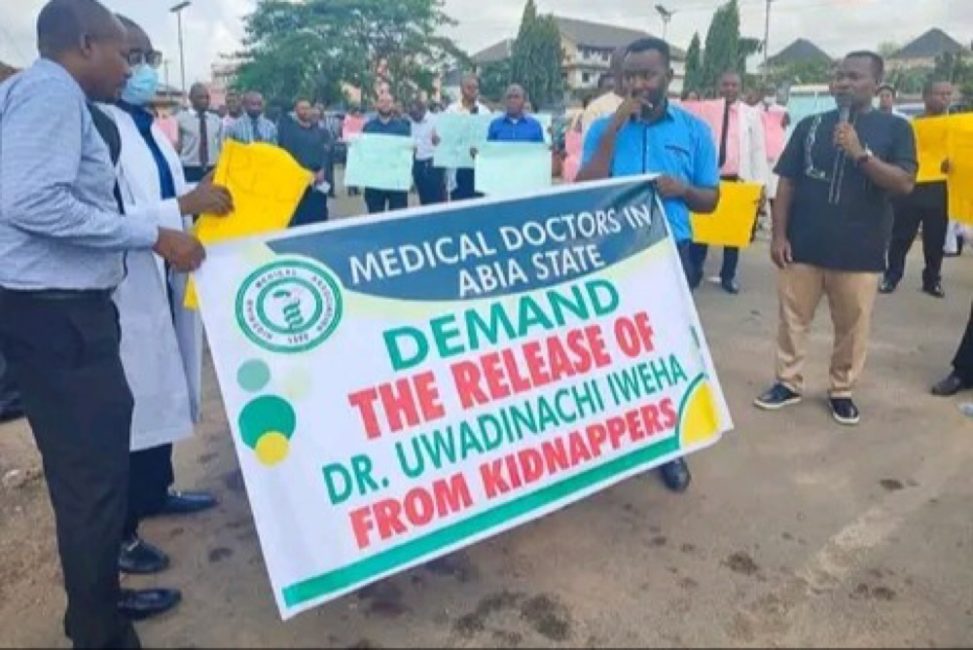 Doctors in Abia State on Tuesday announced the withdrawal of their services in both public and private hospitals over the kidnap and continued detention of their colleague, Professor Uwadinachi Iweha.

The doctors had, during their protest last Friday, threatened to go on strike if their kidnapped colleague was not released.

The medical doctors in a statement on Tuesday after a rally at the premises of the Federal Medical Centre Umuahia,
said that their action was to alert the world that the safety of doctors in Abia was no longer guaranteed.

The statement was signed by Dr. Chimezie Okwuonu, the Chairman and Dr. Robinson Ugwanyi, Secretary of the association in Abia State

NMA further called on the Abia State Government to do all that is necessary to secure the release of Prof. Iweha as they hoped that his health condition would not deteriorate further in the hands of the kidnappers.

Part of the statement said, “As an Association deeply involved in the welfare of Medical Doctors in Abia State, we are worried that nine days down the line, Prof Uwadinachi Iweha is still within the kidnappers’ Den. This is traumatic, depressing, dehumanising and has instilled a lot of fear within the medical community whose primary objective is to save the lives of Abians from the medical point of view.

“The Nigerian Medical Association Abia State hereby condemns the kidnap of its member and calls on the Abia State Government and security apparatus to do all that is necessary to secure his release.

“Our earnest prayer is that his health condition doesn’t deteriorate further and he comes back alive to us and his family.

“With the current state of fear caused by the kidnap and detention of our colleague, safety cannot be guaranteed and it will be difficult to attend to duties as normal as no one knows who will be the next victim.

“Today, Tuesday 14th, the NMA Abia State has commenced a withdrawal of services in both public and private sectors, to register its deep displeasure at this unfortunate incident and give its members time to join the family in searching for its members.

”However, emergency services are still going on to enable our members to attend to critical patients.”