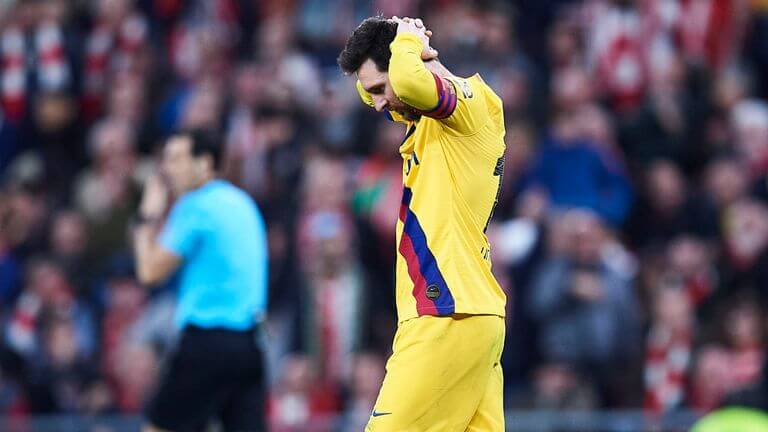 Barcelona have crashed out of the Spanish Copa Del Rey after a last minute loss to Athletic Bilbao in the quarter final encounter at the San Mames Stadium on Thursday.

The Spanish champions conceded a late goal in the third minute of extra time as an Incredible cross from the right wing into Barcelona 18 yard box was shoves into net by Bilbao’s Inaki Williams.

The goal created an exiting atmosphere for the home fans at the San Mames Stadium, while the visiting fans where left with their hopes for a final without their rival Real Madrid was crashed.

While the Bilbao players jubilated, some Barcelona players fell to the ground, while others nelt on the pitch, with the 6 times Balloon d’Or winner, Messi, bowing his head down in defeat, as the goal came at the dying minute of the game.

Williams 83 minutes’ goal has added fuel to the rage at the Catalan club, where a spat between world best player Lionel Messi and club sporting director, Eric Abidal, appeared to have dampened spirits.

Barcelona squandered their chances especially when Messi, played a pass through to Frankie de jong, with Bilbao’s keeper, Simón off his line, de Jong took an dramatic decision to dive rather than continue past the goalkeeper, as the referee did not need the VAR to rumble him.

De Jong went over again soon after, and yet fell in the 18 yard box though was not a dive,the referee decided it was not a penalty.

Gerard Piqué received a shameful yellow as he pulled down Williams, desperately grabbing on to his shirt as the Athletic forward tried to escape up the right, Pique fell, while the fast Bilbao centred back dragged him on the floor in a comic show.

Piqué was booked for the 15th time this season and was soon substituted as he sustained injury while playing in the lion’s den.

Barcelona coach, Quique Setién expressed satisfaction despite the late heartbreak, according to the coach, “We are leaving this competition, it is painful, but the image of the team has been very good.”

“Everything went well today except the result … I am quite satisfied,” he added. “We dominated the whole of the second half, but the penalty is not to get ahead with one of those chances. Sadly, the goal has come to us at a time when there was no chance of a reaction.”

Meanwhile Piqué refused to respond to Messi’s row with Abidal, saying “it’s not the time to dig up dirt. What I can say is that our confidence is at its highest, we’re happy with the way we’ve played and reacted to the outside noise.”

“It’s really hard because we were eliminated (but) we took an important step, we had a very positive feeling,” Piqué added. “It was a very important step forward.”