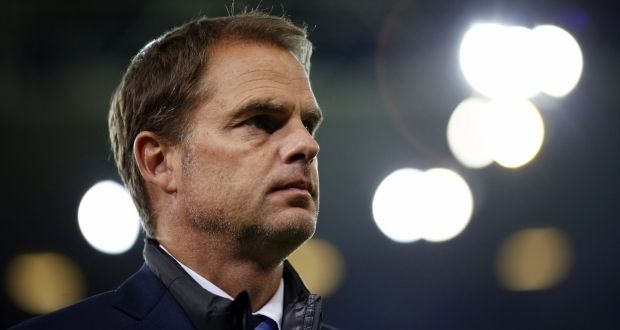 The Dutchman will be replaced by youth team coach Stefano Vecchi, who will take charge of the Nerazzurri when they travel to take on Southampton in the Europa League on Thursday.

De Boer was appointed in August to replace Roberto Mancini, who was sacked two weeks after the start of the Serie A season.

Since his appointment, the former Ajax boss has lost seven of his 14 games in charge, with a 1-0 defeat at Sampdoria on Sunday leaving the 2010 Serie A champions languishing in 12th place with just 14 points

“FC Internazionale Milano announce that they have today terminated the contract with head coach Frank de Boer,” a statement on the Serie A club’s website read.

“The first team will momentarily be coached by the youth team coach Stefano Vecchi, who will be on the bench for the UEFA Europa League game against Southampton.

“The club thanks Frank and his staff for his work with the club, wishing them the best for the future. Further updates regarding the management of the first team will be announced subsequently.”

Newcastle boss Rafael Benitez, Leicester manager Claudio Ranieri and Watford boss Walter Mazzarri have all coached at the San Siro in the past six years.

Messi, Ronaldo Miss Out As UEFA Releases Top Three Contenders For Player Of The Year…