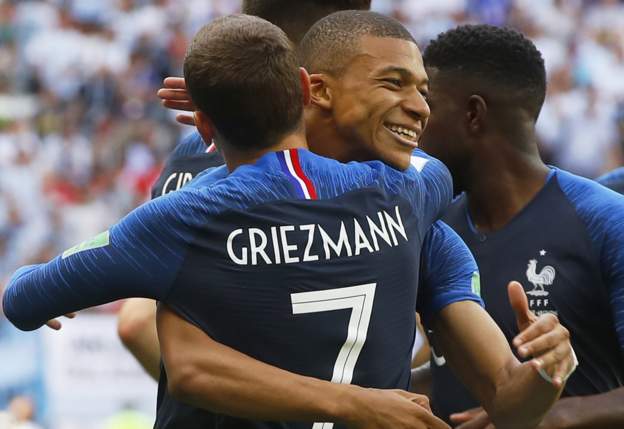 EPA
87
SHARES
ShareTweetSubscribe
#mc_embed_signup{background:#fff; clear:left; font:14px Helvetica,Arial,sans-serif; width:90%;} /* Add your own Mailchimp form style overrides in your site stylesheet or in this style block. We recommend moving this block and the preceding CSS link to the HEAD of your HTML file. */ (function($) {window.fnames = new Array(); window.ftypes = new Array();fnames[0]='EMAIL';ftypes[0]='email';fnames[1]='FNAME';ftypes[1]='text';fnames[2]='LNAME';ftypes[2]='text';}(jQuery));var $mcj = jQuery.noConflict(true);

Teenager Kylian Mbappe scored twice in a remarkable performance as France beat Argentina in a thrilling match to reach the World Cup quarter-finals.

Antoine Griezmann had already hit the crossbar with a free-kick when he slotted home his second penalty of the tournament to put France ahead after 19-year-old Mbappe was hauled down by Marcos Rojo.

Benjamin Pavard’s arrowed strike from outside the penalty area made it 2-2 before Mbappe became the first teenager to score at least twice in a World Cup match since Pele in 1958.

He restored France’s lead with an angled finish from eight yards, and four minutes later netted a first-time shot as the 1998 winners reached the last eight.

Substitute Sergio Aguero headed a stoppage-time consolation for Argentina but they could not force a late equaliser.

France will next face either Portugal or Uruguay, who play later.

‘Your Govt Has Failed’, Okojie Begs Buhari To Resign