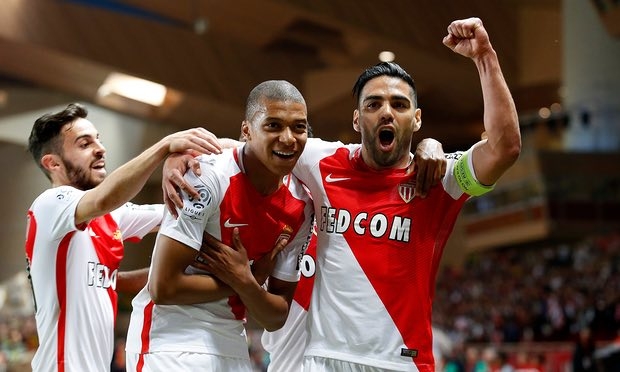 AS Monaco are Ligue 1 champions for the first time in 17 years after a comfortable 2-0 victory over Saint-Etienne at the Stade Louis II on Wednesday night.

The principality club came into the game knowing that a point will be enough to seal the French league title for the eight time and end Paris Saint-Germain’s four-year domination.

Mbappé grabbed his 15th league goal of the season to give Leonardo Jardim’s side the lead in the 19th minute.

The 18-year-old raced on to Radamel Falcao’s through-ball and danced round Ruffier before rolling the ball into an empty net from an acute angle.

Forward Valère Germain put the seal on the win with the last kick of the game, tapping in from close range.

“After the victory in Gambardella [last season], my mother told me: ‘It’s all very well, but it’s with the kids’. I replied: ‘Look, give me a year and I will do the same with the adults’,” Mbappe told Canal+.

“For next year, I promise a better season. We must always set the bar high, otherwise we do not progress.

“I am very happy, we wanted it from the beginning, and it’s done.

“Now we’re going to celebrate, and when the euphoria comes down, we’ll have to get back to work: football is an eternal challenge.

“It will be necessary immediately to recover to be at least as efficient. Football goes fast but it can go quickly in both directions.”

Monaco now have 92 points ahead of second-placed PSG (86), with one game to go.

The Ringing Of Coup Bells And A Cause For Deep Concern