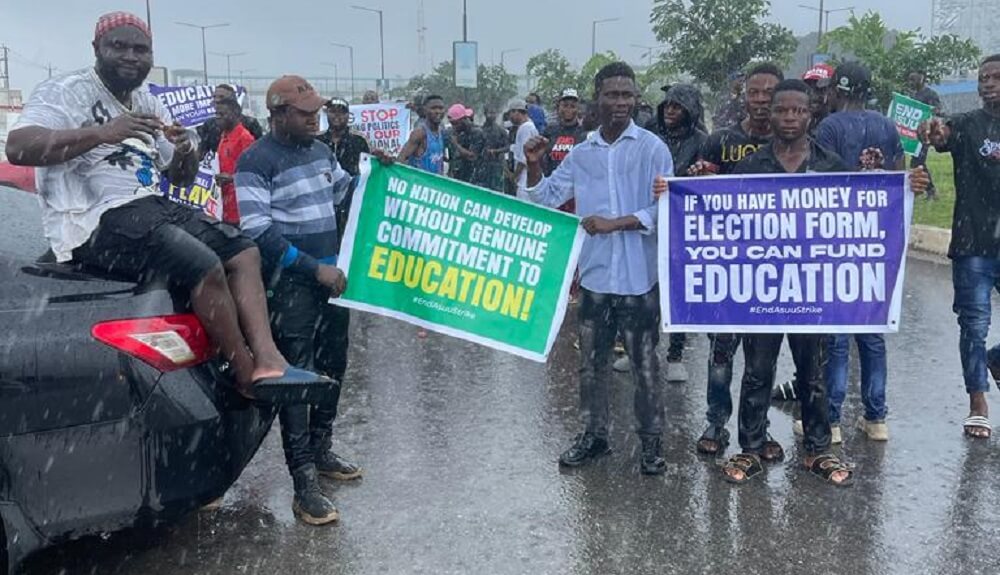 Twitter/Naija_PR
79
SHARES
ShareTweetSubscribe
#mc_embed_signup{background:#fff; clear:left; font:14px Helvetica,Arial,sans-serif; width:90%;} /* Add your own Mailchimp form style overrides in your site stylesheet or in this style block. We recommend moving this block and the preceding CSS link to the HEAD of your HTML file. */ (function($) {window.fnames = new Array(); window.ftypes = new Array();fnames[0]='EMAIL';ftypes[0]='email';fnames[1]='FNAME';ftypes[1]='text';fnames[2]='LNAME';ftypes[2]='text';}(jQuery));var $mcj = jQuery.noConflict(true);

The leadership of the National Association of Nigerian Students (NANS) has announced plans to commence a two-week mass demonstration against the Federal Government over the ongoing strike by the Academic Staff Union of Universities (ASUU).

This followed its earlier protests at Lagos international airport which the body announced at the weekend.

THE WHISTLER reported how members of the body defied security operatives and blocked the road to the Murtala Muhammed International Airport, Lagos, forcing travellers to trek to the airport. Their planned protest at the Abuja airport was, however, foiled by the heavy presence of security personnel around the Nnamdi Azikiwe airport.

According to the protest schedule addressed to members and signed by the NANS President, Usman Umar Barambu, the protest is set to last from 19th September till 11th October across all six geopolitical zones in the country with a final “National shutdown Abuja” after the six protests.

Below is the schedule of the mass protest

Barambu added that NANS would not relent in its efforts to ensure that their demands are satisfied, adding that national officers would supervise the demonstrations to ensure they are peaceful.
“I am glad to inform you that we will remain resolute in making sure our demands are adhered to and in order for adequate coordination, I have directed the following national officers to oversee the peaceful conduct of the protest in the following respective zone in conjunction with the zonal and state structures as follows

“I Comr. Usman Umar Barambu, the President of NANS will co-ordinate the National Shutdown”, he said.

People With Disabilities Seek 5% Employment Quota From MTN, Airtel, Others