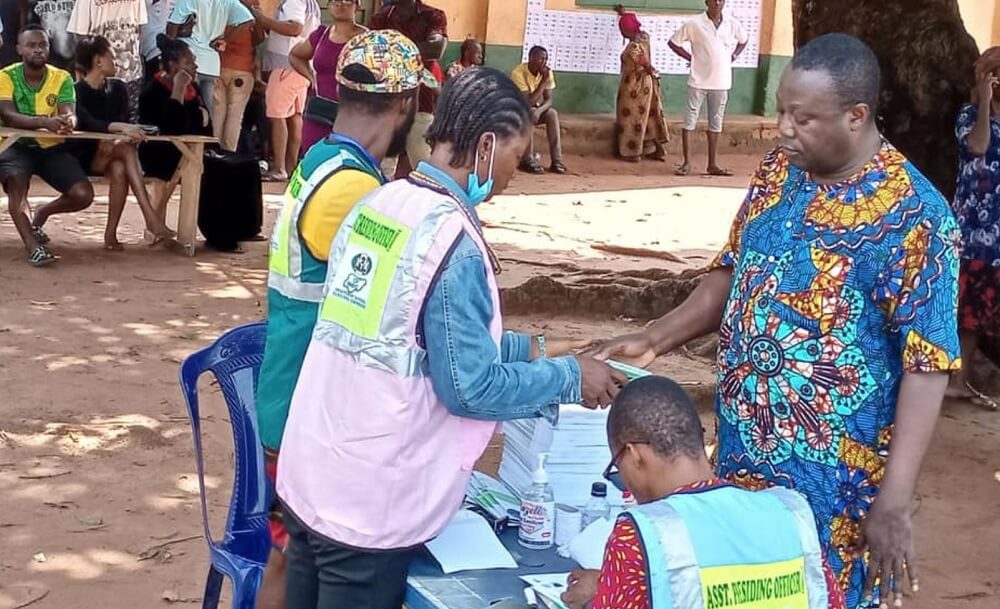 The supplementary election scheduled for 10 am to 4pm, did not commence until noon.

THE WHISTLER reports that electorates may be left with four hours of voting time instead of six, should INEC fail to extended the time.

A live coverage of the electoral process by Arise Television and monitored by THE WHISTLER showed INEC officials pasting the names of accredited voters at past noon while voters hung around.

While they waited for the officials to settle in, some of the voters who spoke to the medium expressed disappointment at INEC’s late arrival.

He noted that the electoral umpire had moved the time of the supplementary election from 8 am to 10 am.

“This is an election that they took time to prepare for a very long time, and it is very unfortunate that in spite of all the preparation, all these things are going on.

“And it is quite painful when it zeroed to only one local government area, and announcement has been made on when the election will start and by now, we are not yet finding people on ground. It is not a good development on the side of INEC but let’s believe that they can still cope with the time because they said till 4 PM,” Ogbonnia told Arise TV.

Similarly, an election observer with the Anambra election situation room, Celestine Okwudili, said: “People will not turn out when INEC officials are not there. INEC officials are the ones that are supposed to sit down waiting for the people to come, not people coming and waiting, looking and going back.

“On Saturday, we were so disappointed, but we tried to deal with the situation and accepting all manners of excuse but for today, I don’t think there should be any excusable reason”.

On the issue of logistics, Okwudili noted that INEC had always had issues of logistics and advised the electoral commission to “just go back and have a reflection on the best way to approach logistics issues”.

He said, “I cannot explain how categorically logistics means to an election because logistics has been a major challenge of INEC and all their work revolves around logistics. But we have hoped that before now, a lot of major things should have been put in place to ensure smooth flow of this election.”

Okwudili, “So, people are bringing in a lot of perspective, is it deliberate by INEC, IS IT conspiracy, what is happening? I think it is high time INEC Sits up”.

Recall that the Anambra election was declared inconclusive on the grounds that voting did not hold in Ihiala, with over 148,000 accredited voters not being unable to exercise their franchise.