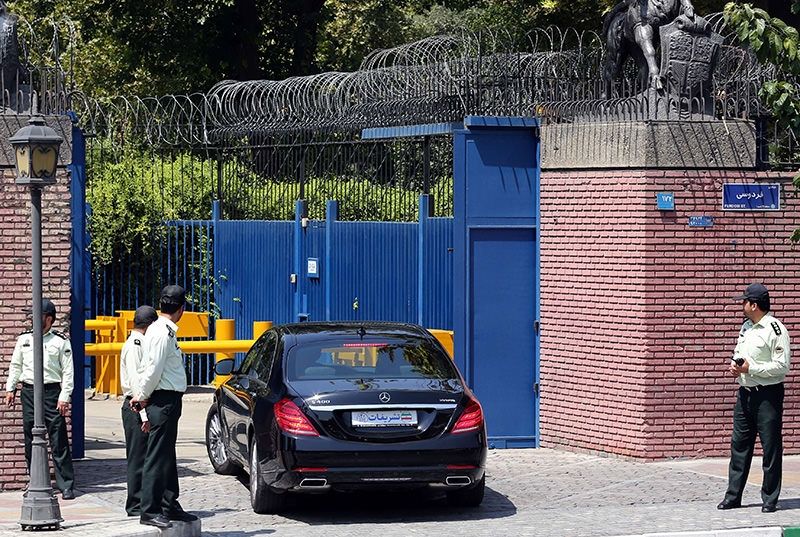 British Foreign Secretary Philip Hammond reopened the British Embassy in Tehran on Sunday, nearly four years after it was closed following an attack by hard-liners.

Hammond arrived in Tehran on Sunday to attend the reopening ceremony and to hold talks with Iranian officials. The trip marked the first time a British foreign secretary has visited Tehran since 2003.

Britain has had no diplomatic presence in Tehran since hard-liners protesting the imposition of international sanctions stormed it in November 2011, but the election of President Hassan Rouhani and the recent nuclear deal between Iran and world powers have brought about a significant diplomatic thaw.

“Today’s ceremony marks the end of one long journey, and the start of a new, and, I believe, exciting one,” Hammond said, adding that reopening the embassy was the “logical next step to build confidence and trust between two great nations” after last month’s nuclear agreement.

In footage aired on the BBC, Hammond spoke from a leafy garden inside the embassy compound. He and a small group of officials then looked on as the British national anthem played and the Union flag was raised.

Terrorism, regional stability and the spread of the Islamic State group in Syria and Iraq are among the challenges Britain and Iran should be prepared to work together on, Hammond said.

“Over the coming months, we will work to ensure that the nuclear agreement is a success, including by making sure that it is fully implemented by all sides, and through this embassy’s efforts we will support British trade and investment, once sanctions are lifted. That will bring benefits for Britain and the Iranian people,” he said.

“The world has realized Iran’s constructive role in the region and the globe,” state TV quoted Zarif as saying Sunday. “Of course, we have differences with some European countries but that can be negotiated through interaction, with open eyes and a realistic approach.”

Hammond and the new British charge d’affaires, Ajay Sharma, were attending the embassy reopening ceremony together with representatives of the Iranian Ministry of Foreign Affairs, the Foreign Office said.

The British Embassy would initially have a small number of staff with limited consular services, but officials expect to upgrade its leadership to full ambassador status in coming months.

The Iranian Embassy in London was also reopened Sunday in London, according to Iranian state TV. Several Iranian and British dignitaries, including former Foreign Secretary Jack Straw, were seen entering the embassy residence Sunday morning, but it was unclear exactly when the embassy would formally resume operations.

Iranian hard-liners oppose the improved relations with London. Many of them had called the British Embassy the “epicenter of sedition” when they attacked it in 2011. They accused the country and its media, including the BBC, of fomenting unrest and encouraging rioters in Iran after the disputed 2009 presidential elections.

On Sunday the reopening of the embassies was greeted with open skepticism and hostility in come corners. The semi-official Fars news agency, which is considered close to Iran’s conservative camp, best captured the sentiment with the headline: “Den of fox reopened.”

“Given concerns over efforts by the enemy to penetrate into Iran after the nuclear deal, it was not appropriate that the British Embassy in Tehran is reopened,” the hard-line daily Kayhan quoted him as saying.

Kowsari called on Iran’s security and intelligence agencies to carefully watch British Embassy operations and “prevent conspiracies by the British government before they are carried out.”

Some 50 demonstrators approached the British Embassy to hold a protest rally hours after it was reopened, according to an Associated Press photographer who was present at the scene. The protesters shouted common Iranian chants such as “death to the U.S.” and “death to Britain,” but also chanted “death to the compromiser,” in an apparent reference to Rouhani.

Iranian police confronted and dispersed the protesters and at least 10 people were arrested, according to the rajanews website

-Associated Press contriibuted to this report – All rights reserved.

All You Need To Know About Debt Restructuring By DMO

UNGA: Iran President Says US Has No Credibility