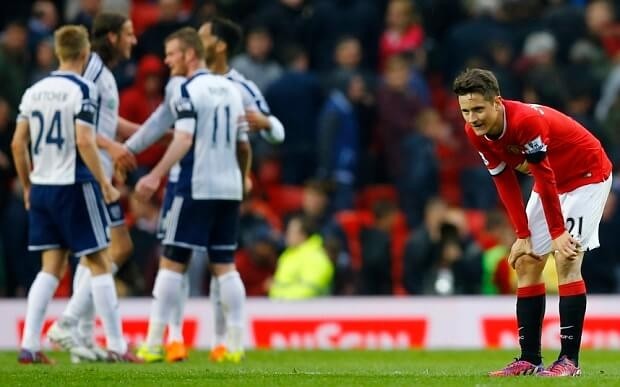 A second half strike from striker, Salomon Rondon dented 10-man Manchester United’s top-four challenge in the Premier League on Sunday evening at the Hawthorns.

The 28-year-old forward scored the only goal of the game and his 10th of the season, to halt a run of four successive wins for Louis Van Gaal’s side, who lost Juan Mata to a red card in the first half, end Albion’s run of 11 winless league fixtures at home to the Red Devils.

The visitors were unable to threaten the West Brom defence, as they lost ground on the UEFA Champions League spot.

The Defeat leaves United in sixth place, three points off fourth placed Manchester City – who has a game in hand, and two behind West Ham in fifth.

“When you have to play 75 minutes with 10 players, I don’t think we were so uncomfortable,” United manager Van Gaal told BBC Sport.

On the other hand, West Brom manager, Tony Pulis applauded his team for their performance against a difficult Manchester United side.

“Second half we were definitely off the pace a bit but the goal was a smashing finish,” said Pulis.

“It has taken him time to settle in and he has had ups and downs but they love him to death here.

“The most important thing is the next game, as you’ve seen this year, results have been off the radar. Let’s get 40 points, I think that’s definitely safe.”

Joe Ledley put the home side ahead just after the break before Firmino equalized in the 72nd minute and a controversial penalty by Benteke in the dying seconds that earned the Reds a vital three-point.

Deep into stoppage time, substitute Christian Benteke went down in the penalty area to a slight contact with defender Damien Delaney, with replays showing that the Belgium might have dived to earn the spot-kick.

However, referee Andre Marriner awarded the visitors the penalty after consulting his linesman and the Belgian striker was on hand to slot home in what was the last kick of the match.

But Palace manager Alan Pardew threw his jacket into the dugout in disgust at the penalty decision and said afterwards his side were “robbed”.

“You’ve got to be 100 percent sure,” he told Sky Sports. “In super slow motion the knee touches the foot and he goes over like he’s been shot.

“The linesman assumes that little touch is a penalty. If you think that touch affects the fall and the way he lands, then you really need to be consulted.

“I feel like we’ve been robbed a little bit but again maybe we shot ourselves in the foot a bit.” 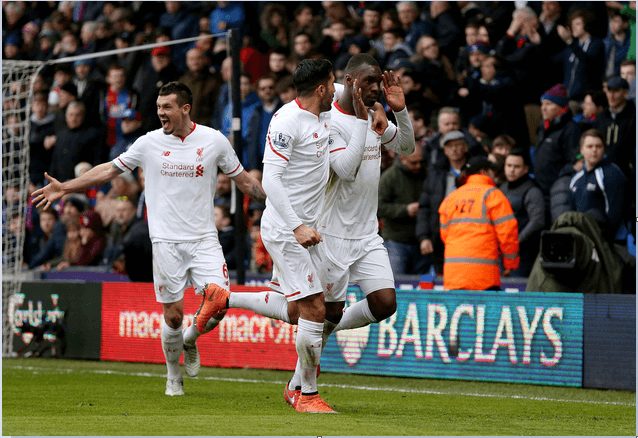 Liverpool manager, Jurgen Klopp thought otherwise, he said: “I feel sorry for Palace but I have just seen the replay in the dressing room and it was a clear penalty.

“If there was no contact, Benteke would have been in a great position to shoot. He made the move and forced the situation.

“This is the third league win in a row. I can’t believe how it feels — really good, a big moment for us.”