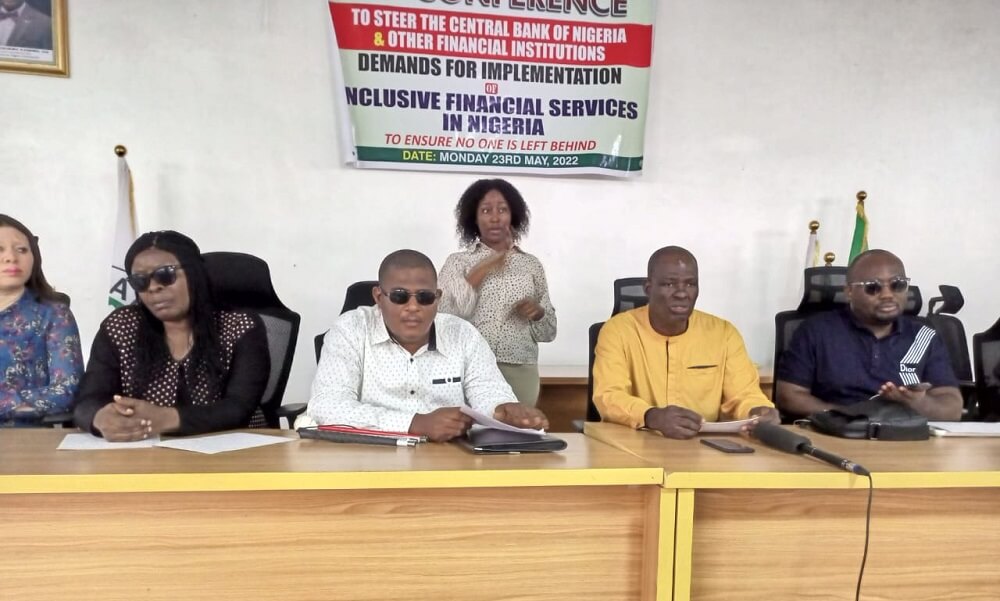 …Give CBN One Week To Address ‘Injustice’ Against Visually Impaired

The Nigerian Association of the Blind has threatened to embark on a nationwide protest over the inability of members to independently access financial services across the country.

The National President of the association, Ishayaku Adamu, issued the threat while addressing journalists on Monday in Abuja.

According to Adam, the CBN allegedly ignored the association’s efforts to call its attention to their plights despite the Nigerian Bankers’ Committee 2012 adoption of nine principles to promote financial inclusion and women’s economic empowerment and integration of environmental and social considerations into all bank decision making.

The group alleged that Nigerian banks have, however, not implemented these principles which would have guaranteed their inclusion financially.

Adamu further stated that the situation had subjected the association’s members to different forms of hardship in their transactions with the banks both physically and virtually.

He said, “In 2012 Bankers in the country came up with nine principles which are mainly to promote financial inclusion and women’s economic empowerment and to integrate environmental and social considerations into all bank decision-making processes.

“Despite this, persons with disabilities and not just our members still face ill-treatment from bank staff due to gaps in knowledge about inclusion and accessibility and methodology to ensure global best practices that put into consideration the needs of diverse disability groups.

“For example, we don’t have ATMs with speech, access to loans, and other benefits enjoyed by other people. We want a disability desk created to attend to us among others.

“We have made several efforts but all to no avail. We wrote on January 28, 2022 to all banks and the CBN, we are yet to get a response.

“We are, however, giving them one week after which we would mobilise the over 25 million Nigerians with disabilities for a nationwide protest against this injustice.”