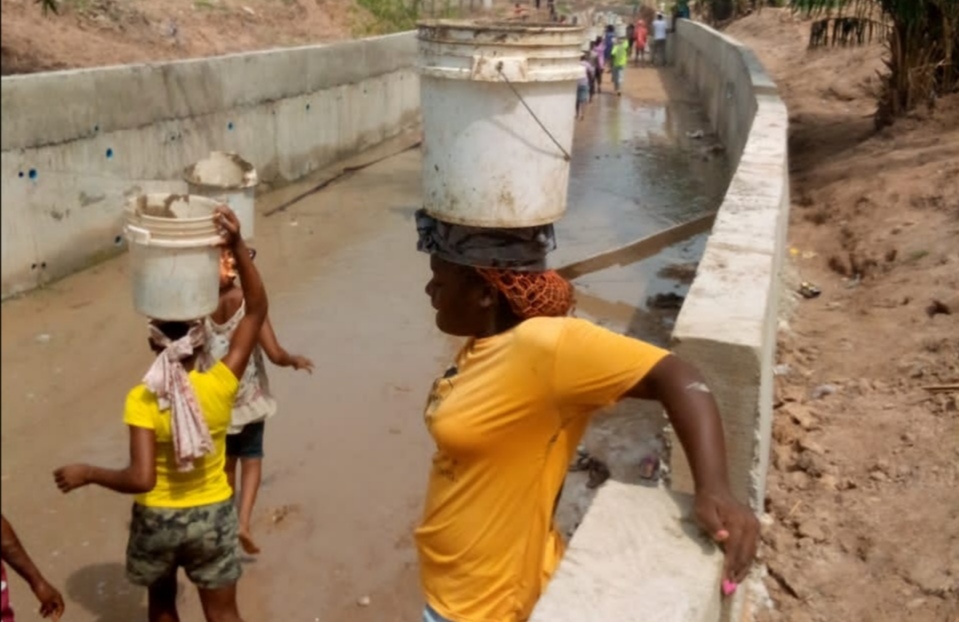 Residents of Agber, a community in Makurdi, capital of Benue State, are currently asking questions over details of a drainage canal being constructed behind the bustling settlement.

Agber is located about ten kilometers alongside the railway line running from Makurdi to Otukpo and further east to Enugu and down to the Atlantic coast.
For more than twenty years, the absence of an effective drainage system in the sprawling settlement of more than ten thousand inhabitants had been the source of much sorrow and lamentation with residents dreading the approach of the rainy season which brought flash floods that wreaked much destruction on homes and farmlands each year.

The prayers of the residents however appeared to have been answered in 2017 when Phase 1 of contract for the construction of the drainage canal was awarded by the Federal Ministry of Water Resources.

This was understandable given the sleepy nature of the community where the consumption of illicit gin (ogogoro) and Indian hemp were usually the only pastimes of the mostly jobless youth who reside in the area.

The first phase of the work was completed more than three years ago and commissioned amid much fanfare.
Work commenced on the second phase but was however abandoned a year later due to reasons that are yet unclear, throwing the community into much anxiety.
Resumption of Phase 2 of work on the canal started some three months ago however, brought back much excitement to the community as more than half of the youth and other residents once again returned to get much needed employment in the construction work on the project.

A mini market, which had sprung up on the banks of the canal during the first phase of work, resumed business almost immediately and is still growing rapidly, boosting economic activity in the area.
The work, which started at a frenetic pace, however slowed down considerably recently following agitations by several youth who became dissatisfied with the terms of employment by the contractors handling the project.

Currently, as a result of the delay, the contractors are pitched in a race against the rains which started about a month ago and threaten to intensify as the month of April draws to an end even as work on the second phase is far from being completed.

It was observed that work now goes on almost on 24 hour basis as the contractor has reportedly adopted a three -shift arrangement to complete the project on time and before the rainy season fully sets in.

Efforts by this reporter to find out the date of completion of the project and other details however were rebuffed as information on the project is not readily available. The project contractors are openly hostile to anybody who shows more than a passing interest in the project, even as residents of the area continue to raise eye brows about the contractor’s adherence to specifications on the contract which is said to cost more than one billion naira.

This journalist has been personally harassed with threat calls by the contractor (duly recorded by the journalist) for seeking details on the contract. The contractor accused this writer of attempting to extort money from him and threatened to deal with him like he had dealt with other ‘thugs’ who had attempted to do same to him.

When this writer called HYPPADEC Chief Executive, Mr. Terfa Tyav to get details of the contract, he referred the reporter back to the contractor.