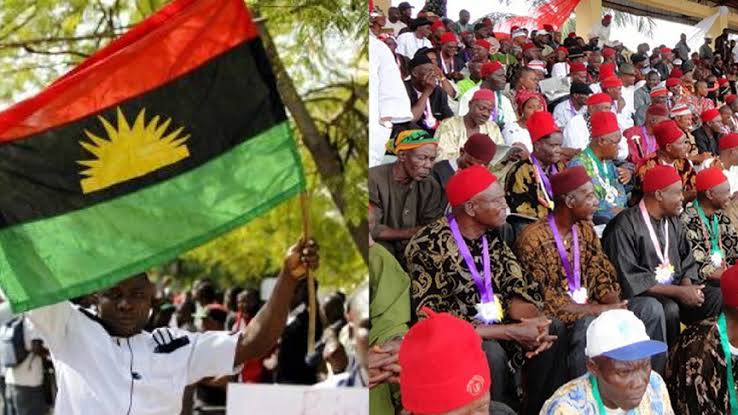 The Movement for the Actualization of the Sovereign State of Biafra, MASSOB, Saturday, reacted to the threat by one Adeyinka Grandson, threatening people of Igbo extraction in Lagos to vacate or be massacred. The leader of MASSOB, Uchenna Madu, in a statement, expressed shock over the threat contained in a video.

According to Mr Madu, “MASSOB has condemned the unwarranted and insensitive video clip that is trending on the social media by Young Yoruba for Freedom (YYF), led by one Adeyinka Grandson, threatening that Ndigbo must leave Lagos and entire Yoruba land before Sunday midnight, which failing to adhere to their ultimatum, Ndigbo will be massacred in Yoruba land.

“MASSOB, as a peaceful and non-violence organization, has worked and is still working in alliance with Oodua Peoples Congress (OPC) and other notable Yoruba self-determination and pressure groups for the betterment of our respective regions, and is shocked to receive such red signal from our Oduduwa brothers.”

Madu, in the reaction, recalled that Ndigbo and Yorubas had ‘lived, interacted and socialized in harmony’ and wondered why Mr Grandon would foment troubles out of his imagination.

According to him, “MASSOB stands for the self-determination emancipation for all regions of Nigeria. Igbo political leaders are in alliance with their counterpart in Yoruba land clamouring for true federalism and restructuring of Nigeria. Ndigbo have contributed about sixty-five percent of economical developments of Yoruba land. MASSOB advised the Young Yorubas for Freedom (YYF) and their collaborators to stop fanning the fan of discord and calumny among the southern brothers.”

Madu said Ndigbo had never declared any aggression against their Yoruba counterparts, or any other indigenous tribe in Nigeria, and denied allegations that the Igbo people masterminded the recent attack and destruction of government and private property in Lagos in the ongoing protest against police brutalities.

Quoting him, “It is evidently known that armless aggrieved Nigerian youths expressing their discomfort against the Nigeria’s worst administration were massacred by Nigeria soldiers, which resulted in burning of government and private property in Lagos. MASSOB warned the perpetrators of the falsehood that is capable of pitching Ndigbo and Yorubas into unpleasant aggression to stop it. Southwest, Southeast, South South and Middle Belt regions have formed a greater alliance that will emancipate them from their political subjections in Nigeria. We shall never allow the Fulani to create divisions among us again.

“MASSOB disclosed that some parasitic Northern elements are no longer comfortable with the Southern and Middle-Beltans alliance for political survival of their respective regions. These enemies of the South are seriously engaging in every effort that will jeopardize the growing and practical brotherhood the people of Southern regions have built.”

Madu further called on the leaders Afenifere, YOLICOM and other groups and individuals of Yoruba extraction to call the Young Yoruba for Freedom to order to avoid heightening tensions that were already ravaging the economy of the Southern region, adding that, “MASSOB also warns the hoodlums in disguise of Nigerian youth protesters to stop looting, maiming, burning and destroying the public and private property of our people. We warned that destruction of government property shall stop now. No Igbo youths in disguise of whatever name should allow himself to be used in destroying the property of the governments in Igbo land.”

JUST IN: 7 Arrested Over Invasion Of Sen. Folarin’s House