Buhari Is Responsible For My Continued Trial – Dasuki 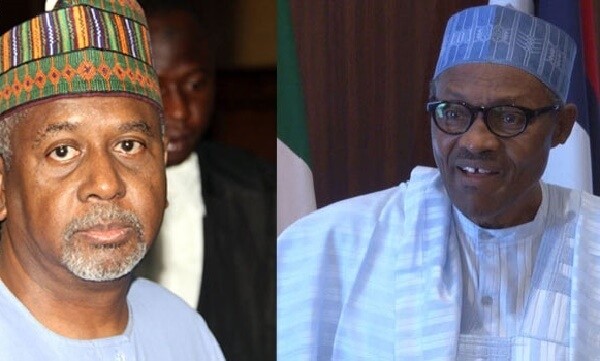 The former National Security Adviser (NSA), Sambo Dasuki, on Friday, revealed that President Muhammadu Buhari is responsible for his arrest and continued detention.

Dasuki, who spoke through his counsel, Joseph Daudu, at the federal high court in Abuja, told Justice Peter Affen, that President Buhari instigated his detention unjustly against the bail granted him by three different courts, through his comment during a presidential media chat in December 2015.

You will recall that Buhari, during a media chat had told Nigerians that Dasuki and the Director of Radio Biafra, Nnamdi Kanu, could not be released on bail because they would jump bail.

Dasuki, who is currently standing trial for allegedly diverting funds meant for the procurement of arms in the fight against Boko Haram, has therefore been held in detention without trial since December 29, 2015.

The ex-NSA, in an affidavit filed in support of his application, therefore asked Justice Affen to prohibit his further trial until the federal government purged itself of the contempt of court which prevented him from filing effective defence because of his continued detention by the State Security Service (SSS), without having access to his lawyers.

Opposing the application, the counsel to the Federal Government, Rotimi Jacob denied that the federal government disobeyed the court.

He said that on the said date, when the bail conditions were perfected, Dasuki was released from Kuje prison, but was however rearrested by another government agency.

Jacob prayed the court not to grant Dasuki’s application because the SSS that rearrested him was not a party to the charges before Justice Affen who granted him the bail.

After listening to the parties, Justice Affen adjourned the case till March 4, 2016 for ruling.

Buhari Did Not Order Removal Of Petrol Subsidy – Lawan