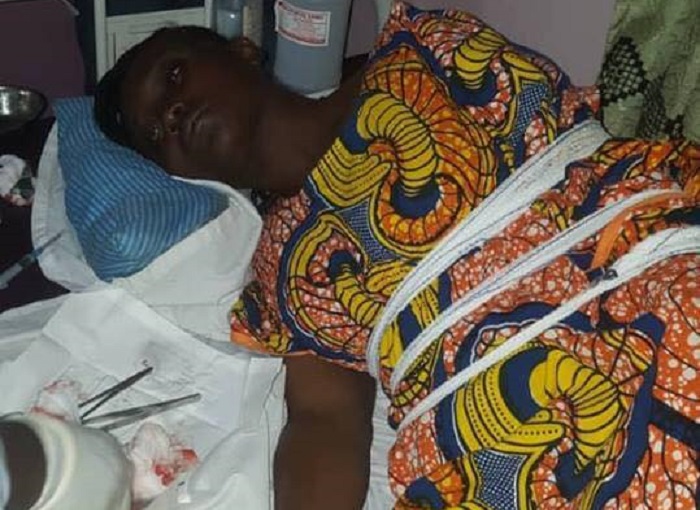 Temitope Mustapha, a journalist with the Voice of Nigeria (VON) Abuja, recounts her ordeal in the crosshairs of the Kaduna mayhem in which about 90 people were allegedly killed.

She was on her way to Kano to attend a two-day media dialogue organised by UNICEF and supported by the Child’s Right Information Bureau (CRIB) of the Federal Ministry of Information when they struck.

Although some other journalist escaped the attack, Temitope was not lucky.

MY EXPERIENCE IN KADUNA CRISES

Passing through Kaduna State on Sunday 21st of October 2018, to connect to Kano State for a two day Media Dialogue on Equity for the Girl Child Education , I never thought would end up bloody for me..

Then I opened my sleepy eyes very wide and clearly I saw Miltary officers seated on their vehicles. Suddenly, a fellow passenger like me said ” Madam we have been making calls to know the safest road” & I said you mean this road is safe for us all? They all answered Yes. Suddenly at Kaduna By- Pass,I saw a trailer blocking the road and traffic was building up and the driver of thesame car I boarded( public transport of of course) beckoned on one of the youths holding a fibre of an iron, of course he responded in Hausa language & another passenger translated this to me that he wanted to find another route out of By- Pass.

Suddenly, a number of the young men sighted me in the car & my driver started pleading with them, telling them ” Da Allah ki ya kuri” ,I was the only female in the car and extremely unusual of me I wore what you saw in the pictures above with an headtie ( turban)that I had on me.

RACE OF MY LIFE

The youngmen best described as Micreants were more than fifteen,they started hitting the side of the car I was, Actually my head was blank, I couldn’t say one word of prayer, I didn’t panic and I was ready to run the race of my life. 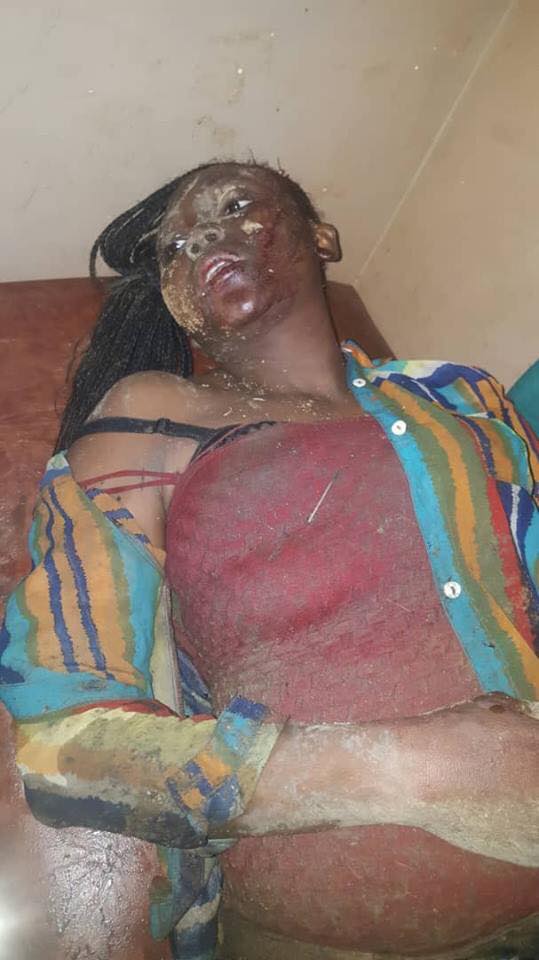 Immediately my fellow passengers took to their heels from the front door and the left door side , then I summoned courage opened the right side door which was already confronted by men holding all manner of irons and stones. My turban ( headtie) fell off , And I started running towards an uncompleted building immediately I realised I could be finished in the building, With heavy stones landing on my back and long metallic objects hitting my body from people running after me ,I turned an thought of crossing the Gutters on Kaduna by – Pass.

O Yes I fell down with the heaviness & marathon of stones landing on my body then I watched myself being LYNCHED with all manners of iron rods, sticks and i was being stonned at thesame time.

Nobody dared stopped these youths from stonning me neither was I rescued from their hands.

I actually saw one of them videoing what they were doing to me & I sincerely was running within me to catch up with breathe. Death is Painful.

I suddenly didn’t not feel the hitting of the irons on my body again & the stones were no longer making sounds to me. I was hearing ,Jesus is Lord inside my Head clearly as if with a mega phone, I was seeing my mother’s,my Son & my daughter’s faces all at thesame time & some how I kept hearing in my head that all they were doing was not up to Labour Pains. 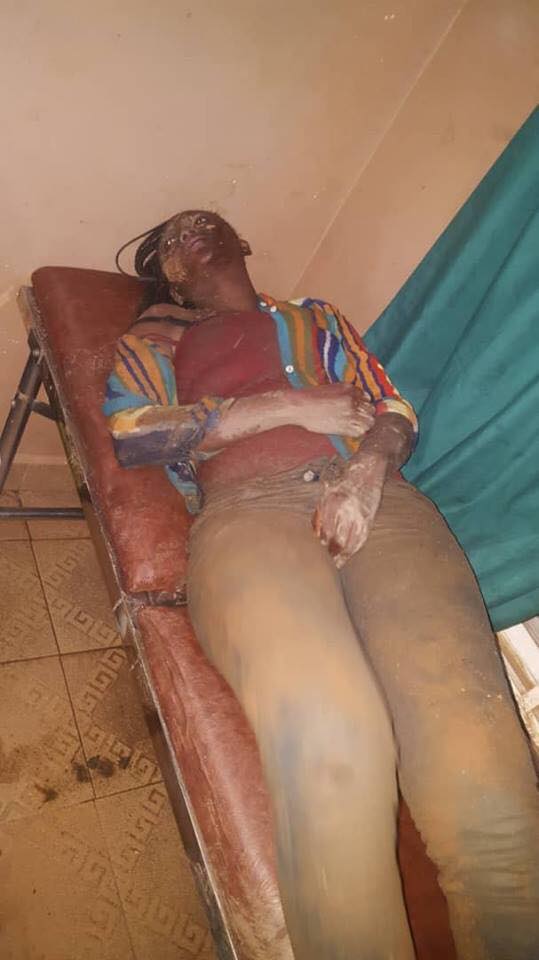 I crawled inside the Gutters ,of course I was already almost inside the Gutters by by-Pass. I felt peace in my body & I found solace inside the Gutters. I saw these youths gathered on the other side ,I blurringly saw a crowd of men watching me , And I saw clearly one of them carrying a stone with his two hands right over me, I raised up one hand pleading to him& making gestures appealing. That was the last I saw.

HEAVY SLEEP OVER POWERED ME

Heavy & Deep Sleep came over me inside the Gutters,the thing overpowered me & I watched my hand threw away, from this moment I didn’t know what happened again ,I cannot tell what,where & anything about me again. I don’t know what switched me off. I was completely switched off.

Till I woke up at AMRULLAH Hospital (also along Kaduna by-Pass )on a stretcher , I started talking telling them I am a Journalist with Voice of Nigeria and I was only passing by Kaduna State to attend a Media Dialogue in Kano State. I attempted standing from the stretcher my body didn’t respond. I was asked for phone numbers , Heaven helped me to remember my younger sister’s number & the father of my children’s number.

COVID-19: Nigeria To Increase Number Of Oxygen Plants To 100

Totally to my rescue, about six drips including flagyl & All manners were set into my system. I was revived, Head suturing were done, the young Muslim doctor was crying while suturing my head, hospital attendants were cleaning stretcher stained with my blood. Everybody was put on guard. The Miscreants traced me to the hospital & demanded that the lady brought in should be released by the hospital to be killed. This Muslim hospital saved me,hidded me away from them & I realised I was kept in a ward locked with a nurse who was given instructions not to open the ward to anyone she possibly didnt know the voice. Only the Hospital Manager, the doctor on duty & two nurses were given access to where I was.

I asked the only face I saw when I woke

up from the “deep sleep”, I said Pls who brought me. He looked at me with tears filled in his eyes & said A JTF Member brought you life-less. He said “we rejected you because you were not breathing and demanded he should not drop your body with us”

The AMRULLAH Hospital Manager said, when we refuse to take you the JTF Man dropped you on our stretcher & said you could come back that we should try.

AMRULLAH Hospital treated me & stabilised me. Then A thousand plus calls came on the Hospital Managers’ Phone,they said My Family Members were dead alive & Colleagues had sleepless night.

MANAGEMENT OF VOICE OF NIGERIA STOOD FOR ME

In the Midst of it all, Mr Ahaziah Suleiman My Exe.Dir.of News, Mr Ben Shemang,Hajia Sani,Hajia Hauwa even the DG I heard all sets contacts in motion for my proper care.

Her name is Hajia Asmau, she was the family I saw,she was the colleague on ground, she wept uncontrollably & was still the one consoling herself ,I watched Asmau wiped tears several times. Above all this lady risked her life to identify with me in the hospital & practically carried a wheeled chair colleague to her house to ensure my safety.

Baba we all call him,Hajia Asmau’s Husband was there to carry me from the vehicle to hospital stretcher , He was there all through right beside his wife fixing my neck most times carrying me on wheel chair. Hajia Asmau’s children all cried uncontrollably and kept asking their Mother,Mummy what did she do to them”. Her family owned me straight up.

Aisha John Mark, Gloria Essien & Omolayo Alabi all pinned Prof. Dr Ogrimma down, owner of SKILLS HOSPITAL, He was there for VON, Of course curfew did not allow X-tray operator to be at work. But Dr Ogrimma tried for me. He ensured the fractured hand was well tied & he gave instructions that further saved me.

I Sincerely hail Mr Geoffrey Njoku, UNICEF Head Communication Officer, who i learnt contacted his colleagues in Kaduna State & informed them of my attack thesame night I was revived at AMRULLAH Hospital. Of course UNICEF contacted Kaduna State government. Lo & Behold ! Commissioner For Health Kaduna State visited the following afternoon of the attack , He later sent an ambulance who took me to government hospital on ” KD State government’s demand” though no bed space & everywhere was already filled with victims.

My bosses didn’t sleep nor take a Nap over my situation in Kaduna. The third day of the incidence my Ogas contacted Gen.Burutai’s Men to save the situation as there was still curfew & I almost couldn’t walk. A very calm Army Boss reported at Hajia Asmau’s residence with his men ,the third day and carried me to 44 MILITARY HOSPITAL to attend to my dangling fractured & dislocated hand. The army medical doctors insisted on thorough xtray including that of my head. At the end the Army left me better.

VON DELIVERED ME WHOLE TO MY FAMILY

Spending three days in Kaduna State at the heat of the crises wasn’t easy at all for my family.(Though Hajia Asmau’s presence created relief for my mother) VON sent an official car with the office nurse and armed men escorted my scattered body with my breathe intact out of Kaduna town . I was exchanged into VON official car @Kaduna Toll gate.

I do have a lot to say about Kaduna State October 2018 crises. While recuperating & bn on bed rest I think when my Nurse ( My mum’s eyes ) are few times away from me) I think about being carried from the Gutters by an Unknown Possibly Muslim JTF Member, I think about AMRULLAH Hospital ( a complete Muslim hospital who God used to stabilised me after coming out of deep sleep & yet not delivering me into the hands of the Hot Headed Miscreants, I think about the safety of Nigerian road users TRAVELLERS in the midst of CRISES across Nigeria???

That I am Alive alone for now, I am grateful to God Almighty.

Hiring U.S. Lobbyists For Millions Of Dollars, Another Chapter In PDP’s ‘Book Of Corruption’- BMO