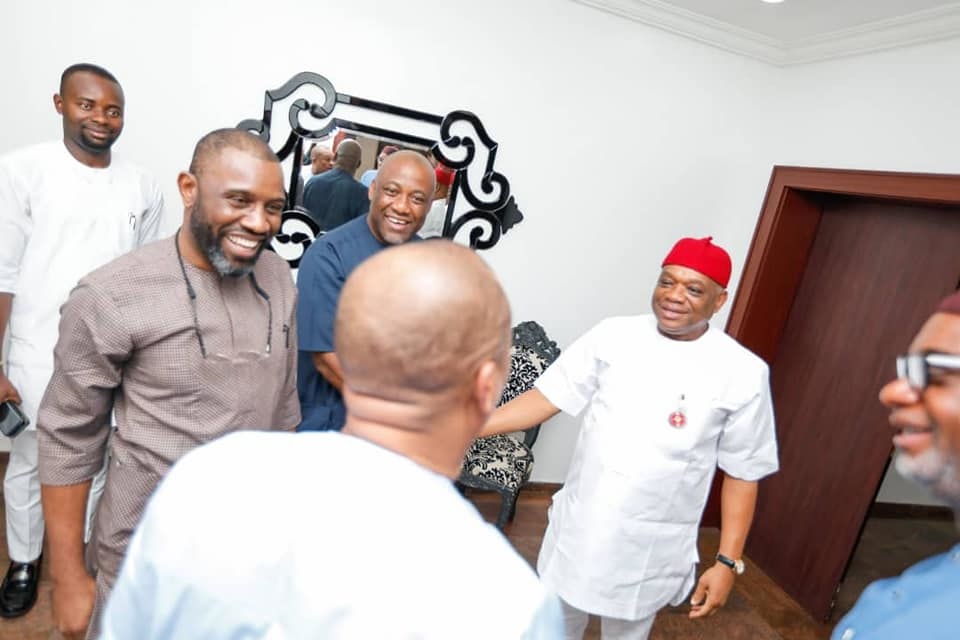 The Chief Whip of the Senate, Senator Orji Kalu, on Thursday afternoon received newly elected officials of the People’s Democratic Party at his Abuja residence amid claims that he’s likely to defect from the ruling All Progressives Congress.

The visiting team was led by the National Secretary of the PDP, Senator Samuel Anyanwu, alongside other newly elected officials of the party.

Anyanwu, a former Senator and other newly elected officials of the PDP arrived at the residence of the Senator representing Abia North Senatorial District past noon and were seen throwing banters.

Pictures shared by Kalu showed him smiling while standing with his visitors as gale of defection begins to herald another election season.

Anyanwu was welcomed by Kalu’s associates and then led straight along with his executives to meet the principal officer of the upper chamber.

On sighting one another, both men engaged in pleasantries and embraced each other then proceeded for an indoor meeting.

As the meeting progressed, other executives of the party arrived in turns at Kalu’s residence to join the meeting.

The visit comes amidst strong campaign from the former Abia State governor to succeed President Muhammadu Buhari in 2023.

He has received endorsement from Arewa Youth and some groups who see Kalu as their only aspirant that can retrieve Nigeria from its doldrums.

Social media went on overdrive immediately as news filtered about the visit with many claiming that Kalu’s defection has long being in the offing.