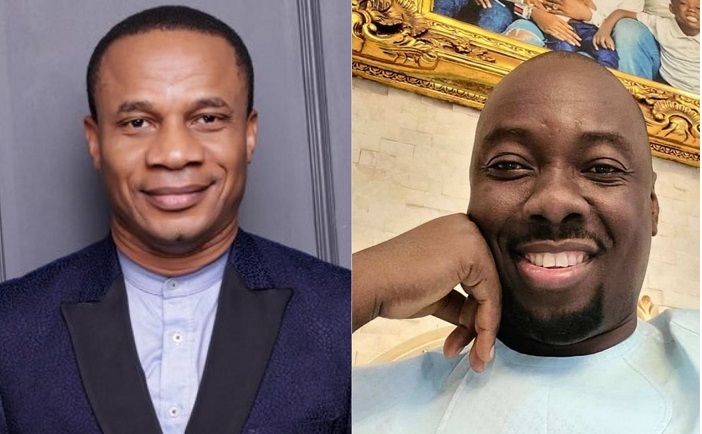 The senior pastor of the Full Life Christian Centre, Akwa Ibom State, Rev Ntia I. Ntia, has withdrawn his criticism of nightclub owner, Obi Cubana, over a lavish burial he held for his mother last weekend.

The burial was the talk of town due to how money was sprayed, the number of cows slaughtered and the caliber of people that trooped to Oba in Anambra State for the event.

Obi Cubana, real name Obi Iyiegbu, had also made news headlines after footage from the burial had gone viral online.

The ceremony had attracted a massive crowd including celebrities and business moguls and there were scenes of heavy spray of money as well as donation of cows.

But the cleric on Sunday, had described the lavish spending of money as stupidity, adding that the venue where the monies were sprayed was not tarred.

“The place where you are spraying money is not tarred…the road is not tarred… can’t you see the stupidity of illiteracy…and ignorant people are excited…yeye dey smell…,” he said.

Cubana had granted an interview to BBC Pidgin where he explained that the wealth he has was a product of hard work from a humble beginning in Abuja where he squatted with some friends.

“Miracle no dey give money because that pastor self e need money pass. Native doctor no fit give you money because his children na dem they fetch water for stream. Work hard. Work hard,” he said to viewers.

Subsequently, another video was floated on Wednesday by an official of Full Life Christian Centre, where Rev. Ntia said that after watching Cubana’s interview with BBC, he regretted making those comments during the service on Sunday.

He added that based on new information, he was sorry for any harm done to Cubana’s reputation by his criticism, adding that he considers him as a great man that has a heart for people.

His words in part: “I want to say something very important, but receive it with the right spirit. On Sunday when I was preaching, I made some comments about a burial that was carried out. And yesterday, somebody sent me a clip of an interview that the man carried out with BBC and in further reflection, those comments were very very harsh and unkind, those comments did not reflect his heart, his attitude.

“With further information, the lives that the man has affected, the people that he has lifted, the destiny that he has invested in…so I want to say sincerely, it is not my intention as a preacher to preach to cause hurt, pain or discredit anybody at all.

“Therefore, in any way those words might have caused harm or hurt, especially in the time of grief of burying a loved one, I sincerely apologize for such comments that came out of place, that came very wrong.

“In any way that words might have pained Obi Cubana or his family, which are my inlaws or his friends, please from this preacher’s heart , with all humility, I sincerely apologize for those comments and I’ve come to say that with the quality of person that he is, he has my respect 100%, we need more of such people who have a heart for people.”