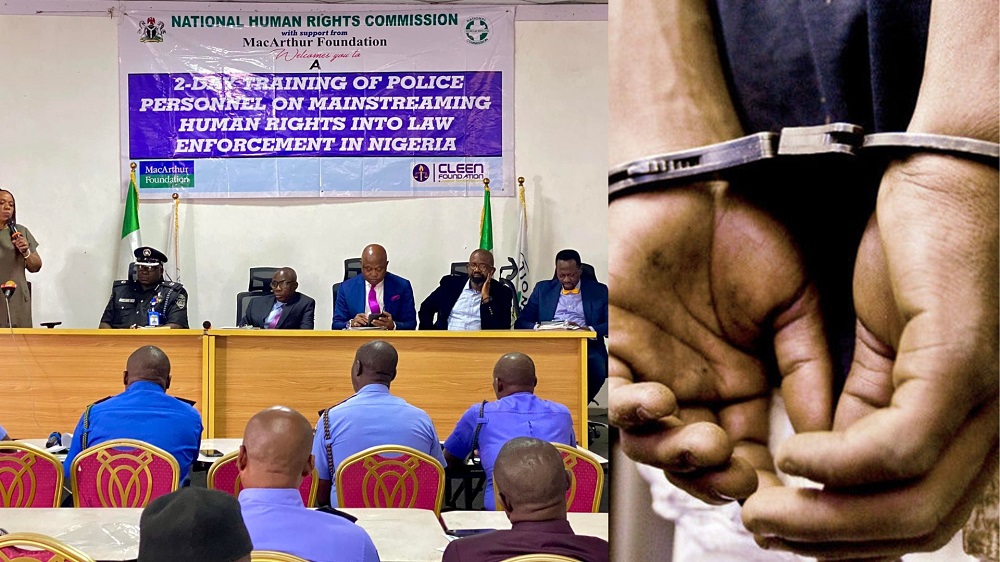 In Abuja, the National Human Rights Commission on Wednesday began a two-day training for some personnel of the Nigeria Police Force regarding the observance of human rights during its operation.

The trainees’ guide obtained by our correspondent bordered on mainstreaming human rights into law enforcement in Nigeria.

It focused on a number of aspects including stop and search, arrest, detention, use of force, public order policing and the United Nations Code of Conduct for Law Enforcement Officials.

The Commission said police operatives should arrest only if there is a court order approving it.

Other reasons that makes arrest legitimate, as stated by the Commission, partly includes: ” Upon reasonable suspicion of having committed a crime, when the person is a flight risk, when the person is likely to commit another offence, depending on the seriousness of the offence, where the person’s safety or other people’s safety is at risk, if the person may interfere with witnesses; when there is a law that mandates an arrest for the offense.”

The Commission advised that arrestees must be treated humanely and in no circumstances should such persons be subjected to excessive use of force more than the minimum force necessary to restrain them.

” Indiscriminate or unnecessary use of force in an arrest situation is unacceptable and officers will be personally accountable for such improper use.”

Earlier, the NHRC Executive Secretary, Tony Ojukwu SAN, said in his address that the training was necessary due to the unfolding security challenges in the country alongside the important role of the police as enshrined in the Police Act.

He also admitted that law enforcement and military operations are the areas where protection of human rights was more crucial in Nigeria.

He expressed optimism that police officers would do their job within the confines of human rights, while condoling with operatives who have “paid the Supreme price in the course of policing.”

NHRC Takes Action On Assault On Police Orderly By Professor