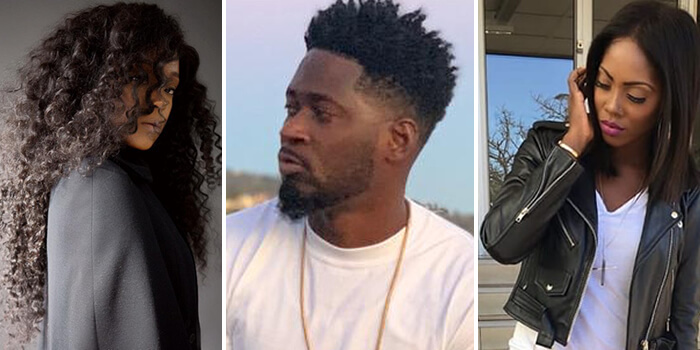 Tosin Robeck, the new artiste recently unveiled by Tee Billz as 323 Entertainment’s new signee, has paid tribute to the latter’s ex-wife Tiwa Savage for her achievements in music.

Recall that Tiwa Savage was reported to have filed for divorce from Tee Billz ­– real name Tunji Balogun –several months after the latter who used to be her manager publicly accused her of sleeping with top Nigerian stars like 2face, Don Jazzy, and Dr Sid which eventually led to their marital crisis in 2016.

Tee Billz, who has been credited for discovering and helping Tiwa Savage to develop her musical talent, had attempted to commit suicide at the peak of their marital crisis at the time.

They were said to have made attempts to make their marriage work after Tee Billz’s outburst, but failed.

Following their reported break up, the talent manager moved out of their Lagos home and relocated to the United States where he later discovered Tosin Robeck.

Fans of the estranged couple have since been making attempts to compare Robeck’s singing prowess to that of Tiwa Savage since Tee Billz unveiled her.

But Robeck, in an attempt to perhaps put a stop to the comparison, posted Tiwa Savage’s photo on her Instagram page on Monday, where she praised the singer for her achievements in the Nigerian music industry and for her recent signing to UMG.

She wrote, “In a male dominated industry, very few women get a chance to carve a niche for themselves let alone attain the same level of success as her male counterparts; @tiwasavage did all of that and even more.

“You have made it possible for young female artists like myself to believe we can attain the highest level of success in the African music industry in spite of the countless limiting factors women have to deal with to succeed in this industry. Your intrepidity, consistency and relentlessness has led to an inexorable rise as a global female artist. Your ingenuity as an artist is nonpareil and I’m beyond thankful that once again you have raised the bar even higher.”

Tiwa Savage’s new deal with Universal Music Group saw an end to her 7 years membership of Don Jazzy’s Mavin Records under which she released chart-topping songs like “Eminado” “Without My Heart” “Malo” and a host of others.

‘Sorry I Messed It All Up’ – 2Face Apologises To Wife, Denounces…

‘Keep Your Support To Yourself’ – Don Jazzy Rebukes Mavin Fans Who…

‘Family Is Your Worst Enemy’ — 2Face Reacts As Annie Idibia’s…