13 Dead, Scores Injured As Car Rams Into Crowd In Barcelona 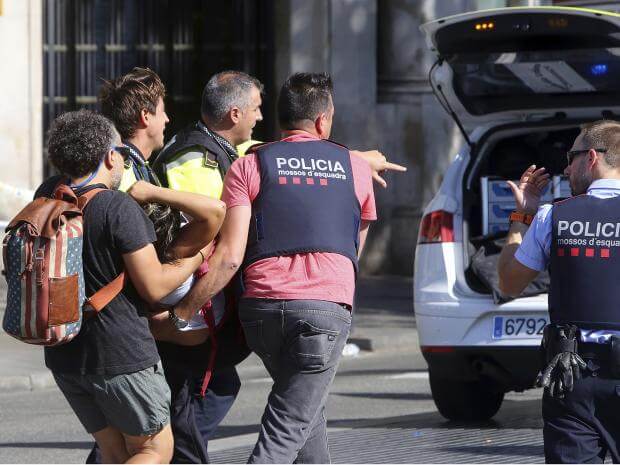 No fewer than 13 people have died and 50 others injured after a truck ploughed into people in Las Ramblas tourist area, in Barcelona, Spain, local officials say.

The van drove on top speed along the pedestrian lane, as people were seen fleeing, using shops and cafes as cover.

Catalan police say one person has been arrested in connection with the incident, which they are treating as a terror attack.

Locals say the driver targeted people before stopping and reportedly fleeing on foot.

The BBC reports that Tom Markwell from New Orleans, who was just arriving in a taxi in Las Ramblas, said: “I heard a crowd screaming. It sounded like they were screaming for a movie star.

“I saw the van. It had already been busted on the front. It was weaving left and right, trying to hit people as fast as possible. There were people lying on the ground.”

John Boall, who witnessed the attack, told CNN that he first saw the van at Plaça de Catalunya.

“The van started there and just went down through the whole (of Las Ramblas) until just in front of La Boqueria market (about 400 meters),” he said.

He added that the van crashed “at a place where they sell newspapers in the middle of Las Ramblas, where all of the pedestrians walk.”

Facebook has activated its safety check mechanism, allowing users near the scene of the attack to mark themselves as safe.

President Trump joined other world leaders to condemn the attack, saying, “The United States condemns the terror attack in Barcelona, Spain, and will do whatever is necessary to help. Be tough & strong, we love you!”