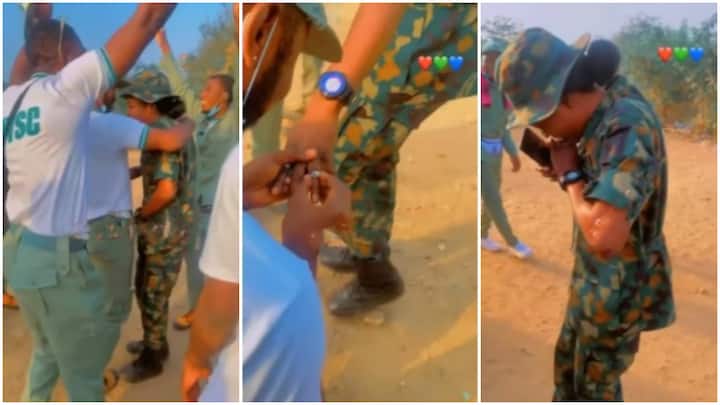 The Nigerian Army has reportedly pardoned a female officer identified as, Hannah Sofiat, who publicly accepted marriage proposal from a male corps member at an orientation camp of the National Youth Service Corps (NYSC) in Kwara State.

It was learnt that the COAS, in the last few days, made overtures to the leadership of the Nigerian armed forces, requesting that the soldier be pardoned.

He, however, maintained that the erring soldier should be strongly reprimanded against engaging in any kind of act that contravenes the military code of conduct for its officers.

THE WHISTLER had earlier reported how the officer was detained for violating military laws by getting involved in a public display of amorous relationship with a paramilitary trainee – a corps member.

According to the army, the female soldier’s action amounted to taking advantage of her trainee, noting that the public would have been outraged and accused the Army of coercion had a male soldier proposed to a female corps member during NYSC parade.

Recall that the female officer became an internet sensation after accepting the marriage proposal at the Yikpata NYSC camp in Kwara.

Army Officer Arrested For Assault Of 2 Police Officers In Ibadan

With Combined Wealth Of $20.1bn, Dangote, Adenuga Can Lift 63 Million Nigerians Out Of Poverty