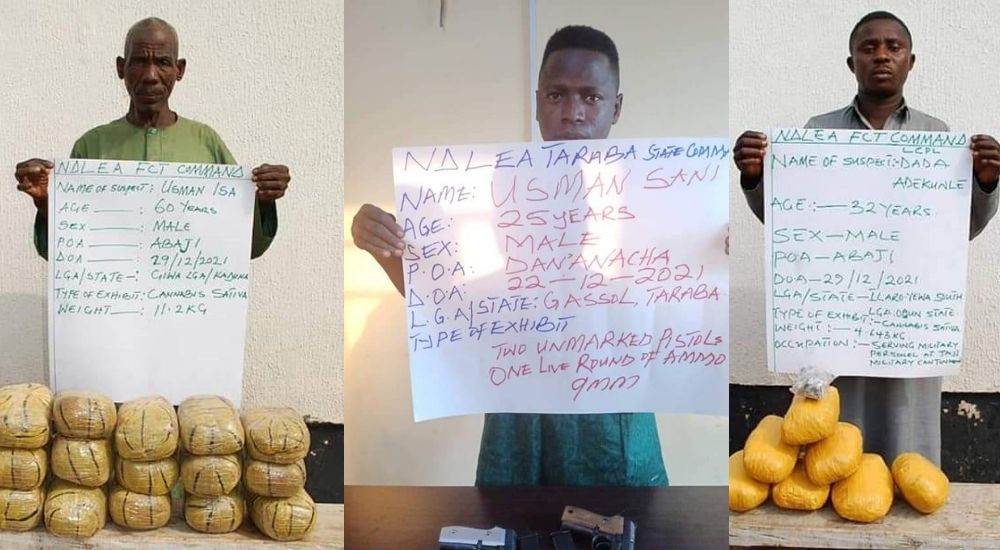 The suspects were arrested with 427 kilograms of illicit drugs in Borno State and the Federal Capital Territory, Abuja, said the NDLEA.

The anti-narcotics agency said the suspects who wore uniforms of security agencies to mask their identities were apprehended by its vigilant officers.

The NDLEA director of media and advocacy, Femi Babafemi, announced the suspects’ arrest in a statement on Thursday.

“While Yakubu Kotri, impersonating as a military personnel was arrested on Wednesday, 29th December driving a gulf car loaded with Cannabis Sativa weighing 208 kilograms on his way to Bama, Borno state, another suspect, Salisu Mohammed who adorned the uniform of another security agency to traffic Tramadol to Bama was also nabbed by narcotic officers on patrol on the route same day.

“Although the pictures of the arrest of Yakubu Kotri in uniform have been trending on social media since Wednesday, the Agency wishes to disclaim such because the suspect has not been confirmed to be a serving military personnel.

“In the same vein, another impersonator, Dada Adekunle was on Wednesday arrested along with his 60-year-old accomplice, Usman Isa, in Abaji area of FCT with 15.843kg Cannabis, while 20kg of the same drug was seized from Alfred Aminu who was intercepted at Gwagwalada same day,” said Babafemi.

He further revealed that the NDLEA on Tuesday intercepted a commercial truck with registration number GME 874 YX that was en route to Mubi in Adamawa State from Onitsha, Anambra State.

“Upon search, 7.8kg of 225mg Tramadol was recovered (from the truck),” Babafemi said, adding that “Also on Tuesday in Yauri area of Bauchi state, operatives arrested one Shaft’atu Abubakar with 174 kilograms of cannabis and 2.1kg Diazepam, while a suspected bandit, Usman Sani was arrested in Dan-Anacha town, Gasol LGA, Taraba with two pistols and ammunition.”

He said the NDLEA chairman, retired Brig. Gen. Mohamed Buba Marwa, commended the officers who made the arrest.

How Abuja Police Officers Abducted Me, My Brother, Withdrew N550,000 From Our…