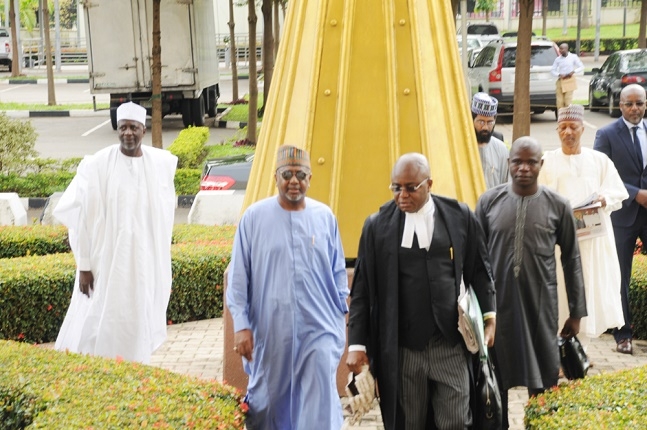 The Federal Government feigned surprise on Thursday at the absence of former National Security Adviser, Col. Sambo Dasuki, before an Abuja High-Court for money laundering and corruption trial.

At the resumed trial Thursday, the Federal Government’s counsel, Rotimi Jacob, expressed surprise that Dasuki was not brought to court by his client.

Jacob told the court that he had notified the Economic and Financial Crimes Commission (EFCC) on the trial and the need to produce Dasuki in court, but gave the excuse that it could have been as a result of communication gap between the EFCC and SSS was responsible for non-production of the former NSA in court.

While he applied to Justice Affen to stand down the case for him to enable his client to produce Dasuki in court, he however did not say when Dasuki can be produced before the court.

The request was opposed by counsel to Bashir Yuguda, former Minister of State for Finance, Olajide Ayodele (SAN) counsel.

Ayodele said the failure of the prosecution to give a definite time within which Mr. Dasuki would be brought to court by either EFCC or SSS was an indication that he had no knowledge of what was transpiring between the EFCC and DSS on the matter.

Mr. Olajide therefore pleaded with the judge to adjourn the trial.

Jacob Daudu, counsel to Dasuki aligned himself with the argument and regretted that the government which put the ex-NSA on trial was the one scuttling the trial.

In his ruling, Justice Affen agreed that it would be unfair to stand down the case without a definite time within which Dasuki would be produced in court and adjourned the matter to October 21, 2016 of which the FG should produce him in court.