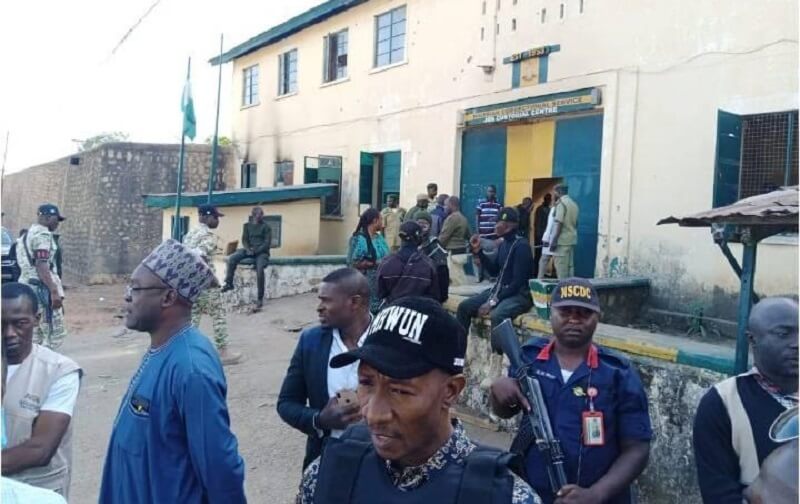 Despite having biometric data of all inmates across prisons in the country, the Nigerian Correctional Service (NCoS) has yet to identify the alleged terrorists who were trapped while attacking the Medium Security Custodial Centre in Jos, Plateau State, on Sunday.

The Minister of Interior, Rauf Aregbsola, had earlier in the month claimed that the government had captured the biometric data of all inmates in correctional centres in the country.

Aregbesola made the claim during the weekly briefing of the presidential media team held at the State House on November 11.

The minister, who made the claim after over 800 inmates reportedly escaped from the Abolongo Custodial Centre in Oyo State during a jailbreak, said the government now has the “capacity” to track and identify criminals who escape from prisons in the country.

But the Plateau State Commissioner of Information, Dan Manjang, said the NCoS was still profiling inmates at the Jos prison to identify invaders suspected to have infiltrated them.

“The good thing is that the inmates have not escaped. It is being said that their carcass are there but the Correctional Centre officials are profiling and after that they will know who are the inmates there, and the infiltrators and they will be arrested and brought to book,” he said.

Armed men with sophisticated weapons had invaded the facility at about 5:20 pm on Sunday, shooting sporadically in the air. The management of the prison said some of the attackers were trapped inside.

Manjang could not confirm whether the attackers have been arrested more than 20 hours after the incident.

“By now the profiling should have been done and it happened throughout the night and the updates are going to be made available to the Governor when we go there, probably at some point in time we will come back again and give you an update of what has happened” he said.

The commissioner cautioned the public against disseminating false information about the attack.

On if the authorities had prior intelligence about the attack, Majang responded in the negative, but noted that the various jailbreaks across the country in the last one year have been orchestrated by those benefitting from it.

“Clearly it is as a result of criminal elements. There are people benefitting from this. It is our prayer that the enemies should be from within. There are people that you and me know that benefit from situations like this, otherwise if there was no benefit they will not perpetrate it” he said.

Meanwhile the state’s police commissioner, Bartholomew Onyeka, has ordered his men to carry out stop and search operations in the state for possible identification of inmates who may have escaped.

He noted that, “seven inmates who escaped were rearrested by the police and are in custody. One of them voluntarily surrendered himself to the police”.