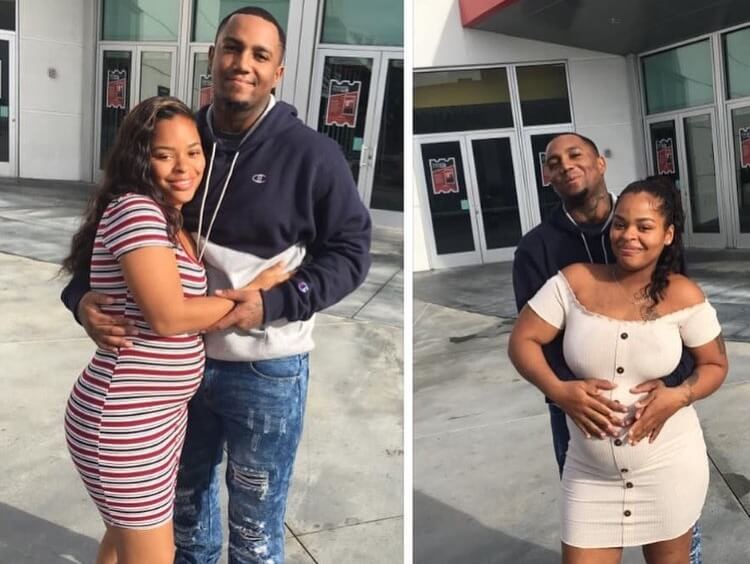 The photos of twin sisters who are happily pregnant for the same man are currently circulating wildly on social media.

The pretty twin sisters are said to be pregnant for an American man, Keonyae Banks, who is their boyfriend and they don’t give a hoot about what people think about it.

Banks took to his Instagram (@takeoffdemdraws) to brag about how he is “the only n*gga with twin baby mommas,” sharing photos of himself getting loved by both sisters.

The photos are generating a lot of buzz on Instagram as some users on the photo-sharing platform are giving kudos and knocks to the young man.

@runawayhairline: “Bruh I just saw this shit on FB, had to come here and see if it was real, you’re not the hero we wanted, but the hero we needed, you’re a beacon of hope, an inspiration to us all.”

@thalovelymonnea: “How do them as twin sisters. hell sisters period make dumb shit like this ok your babies are 1 cousins and sibling.”

Instagram To Roll Out New Teen Protection Features Ahead Of U.S Senate Hearing

@randy_savage00: “Every single comment and I mean every single one, is fucking Big MAD haters. 90% of the females in comments use to suck and fuck the same nigga in high school and college, Now because they Mom’s put they THOT Ass on birth control and they dodged a baby bullet by their Cousins Baby daddy they Feel empowered to Degrade this man and his family.”

@tokiyodope: “That’s basically Incest. The two sisters probably be having sex too. Like that’s gross. And I guess I don’t share my man period. But to me it’s pure ignorant. He’s disgusting for that.”

@itsmsbryan2u: “WoW, I hope you got money to send them kids to therapy because they’re going to need it.”

@vanitee__: “You will be the only niggah nobody on that fck shit but y’all little ass fast ass kids , y’all family think y’all sick as hell your children will HATE YALL.”

@prettykitti34_: “@takeoffdemdraws mad about what? Mad at your trash ass music or them ugly ass twins u impregnated. Sir no one really gives a fuck about u or ur ugly ass thots. We find you and those creatures disgusting and disturbing. I’m a pray for the innocent babies.”

@sourblockspaz: “Ya baby gon be dumb as hell bruh and confused as shit.. Fuck they gon call you uncle-pappy. I definitely know your grandkids gon call ya ugly face ass uncle grandpa.”

@daogbarbie: “its incest for one…secondly are you fuckkng retarded THEY ARE HAVING A BABY BY THE SAME MAN you are on dope if you think they dont do threesomes and a whole bunch of other nasty dog shit….stop trying to normalize this sick motherfucker and these 2 dumb ass incestuous hoes.”

@tequila.klia: “You don’t know if they all had sex the same night in the same room in the same bed. 2. They have the girls have the same DNA. Not the man. Insect is DEFINITELY when 2 people related have sex with each other.”

@iamrobynfly: “I just came for the comments … Uncle-dad with sibling-cousins for children … wondering how they’re going to explain this to their friends at school.”

No Part Of Nigeria Will Suffer Neglect Under Me, Buhari Assures Nigerians